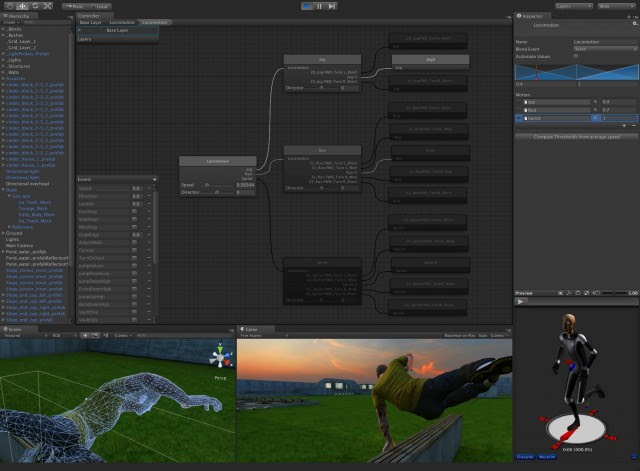 AAA developers with deep pockets are no doubt looking forward to the many gorgeous upgrades available in the upcoming Unreal Engine 4. But smaller independent developers will probably be more excited about the new features for Unity's just announced Unity Engine 4.


The new version of Unity fully integrates new animation tools from Mecanim, a Canadian company that Unity acquired last year. This brings skill from experienced animators who have worked with major publishers including EA and Ubisoft. Besides improving computational efficiency and increasing Unity's limit on simultaneously animated characters from dozens to "hundreds" at once, Unity President Dave Helgason stressed that the Mecanim system makes animation much simpler for developers.

"Things that would normally take several hours or even days to do—taking the animation data, making sure it fits the character, timing the motion extracts and making sure it all loops correctly—now that's all automatic so it's literally minutes... you can do so much more with so much less," Helgason told Ars. Users will also be able to buy canned animations from the Unity Asset Store, dropping fully animated characters into their projects unedited, or diving in deep to play with the underlying blend trees and state machines if they want.